This Forum is your chance to discuss all things ‘Moreton Bay’

Just email your comments to Peter Ludlow at peter.ludlow@me.com

Peter Muir (uploaded 22.04.2021) asks: Can any readers can supply more information on my family history. The research relates to my Great Great Grandfather, David Muir, and his brother Andrew.  David and Andrew, both shipwrights, arrived in Brisbane in the 1850’s and their association with the Port of Brisbane started early.  In 1862 David was appointed the Government Shipwrights Surveyor on the Marine Board of Queensland. He subsequently continued to work as a shipbuilder and, I believe, owned the Countess of Belmore.  He lived on the corner of Margaret and Albert Streets.

Andrew Muir appears to have had a shipyard at Kangaroo Point (next to the BISN Company Workshop) and was engaged in trading up and down the Queensland Coast – and hence was a solid user of the Port’s facilities. At various stages he owned the following vessels: Julia Percy (half share with William Pettigrew), Ottawa, Diamond, Young Australia, and Lizzie Muir. Andrew appears to have lived at, or next door to Bartley’s Tower on what is now known as Bartley’s Hill. Death notices and PO Directory entries refer to him living at The Tower, Breakfast Creek, and the BCC’s Heritage online site for Bartley’s Hill Reservoir refers to “Muir’s Place” as the location used for the second reservoir.

Sue Golik asks: (uploaded 13.02.2021) Would you have any material relating to Forbes Cabins at Amity Point back in the 60’s, 70’s & 80’s? My family holidayed there every year before moving to Darwin when we’d go back to Amity every 2 years. I have such wonderful memories of dear Mr and Mrs Forbes and their cabins which sadly are no longer there. Any information would be so very much appreciated.

John Smith asks (uploaded 21.09.2020): I received Moreton Bay Reflections which I purchased for the story about Sarah Mills buried on Mud Island.  I am a descendant of Sarah’s son, Abraham who came to Australia on the Lobelia in 1865.  I was wondering if you have any reference to Sarah Mills in any of your other books?  Do you know where I can find any more information or references or if there is a plaque on Mud Island.  If you have any other information that would be greatly appreciated.

Karen Luck asks: (uploaded 21.09.2020): My chase now is my SOMMER, WICHMANN, GOTTSCH, SPANN, and  SCHULTZ families who are all married into one another, from old Beenleigh area. After many many years of researching these families I have heaps of info. My question is would you know if there is any Family Book already done on these families, or a web site to see if these families books are done.

Tina Orange asks:(uploaded 19.09.2020) I live in the UK and during the lock down have had time to go through some of my mother’s old letters which have not seen the light of day for many years.
There was always talk about family in Australia but I have very little to go on Jack Carling married to Kate  Brown my mother’s aunty came from Northeast of England 1940? Worked on Peel Island last letter 1960,s
Long shot saw your blog though you could help.

Jonathan Hickling asks: (uploaded 12.07.2020) I’m looking for old photos, and or articles of Watts and Wright Boat Builders of Bulimba.
I own a vessel built by them, launched in 1957.
There appears very little about them in available digital records?

Helen asks: (uploaded 16.06.2020) Does anyone have any memories, good or bad, of a Joseph Daniel who use to live on Cribb Island and died in 1974. I think he was my Grandfather. many thanks Helen

Ross Cameron commented on my blog: Kleinschmidt’s Depot at Grey Street – Part 2  Here is a photo of their Depot at Southport:

In 2012 I visited Kooringal, a small village at the bottom tip of Moreton Island and was shown around by two of the locals. We visited the grave of Edward Jones, which I recorded as: ‘Our next stop in John’s 4WD tour is at the grave of Edward Jones, an oysterer of earlier times, who died on 1st November 1916. His is a lone grave on a hilltop out in the bush behind the settlement. No path leads there, and we have to rely on Nancy’s expert guidance to find it. The grave’s metal fence is in excellent condition and still very sturdy after all these years, but the marble headstone has broken again (a former attempt to glue it has come unstuck). Also as Kathy notes, it has been moved off-centre.’

Could Edward Jones be Frederick William Jones’ father? I have attached two photos of the grave, and will be interested to hear your thoughts. 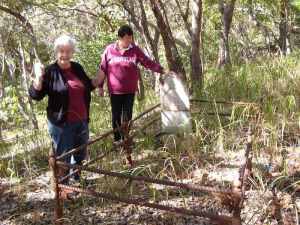 Yes! Edward Jones is the father of Frederick William Jones! I have found the connection on Ancestry.com.Thank you so much for the precious photo of Edward’s grave.

‘The Passage of Time’
by Noel and Del Bergman

Our book, The Passage of Time is about one of the many ships that brought our Ancestors to Moreton Bay in the nineteenth century. The new Queensland Government was encouraging Immigration from Germany and Scandinavia. In 1865 alone, 2611 passengers embarked on eight different ships from Hamburg. One of these was the “Susanne Godeffroy” and she commenced her journey with 533 passengers, and was normal for the time, there were hatches and dispatches during the voyage. The “Susanne Godeffroy” left Hamburg, Germany on the 6th May 1865 and arrived in Moreton Bay, Queensland on the 6th September 1865. A journey of four months.

The book tells the exciting history of this hazardous voyage and the story of the lives and fates of these passengers who emigrated on her to begin a new life in Queensland. It also covers the lives of the first generation born after arrival. For further details please visit our webpage at:

The mystery wreck at Boggy Creek

We have had this photo of a wreck in Boggy Creek near Myrtletown sent to us at the Queensland Maritime Museum, that is causing a bit of a mystery and thought you may be able to help.

In the discussion, does not appear to be “Mosquito” or indeed “Koopa”, so can you shed some light on this???

Am sending you what the sender said with the photo. It goes :-

“Some extra info, its approx 27m long and 7m wide, when I looked more closely I realised that’s its in an L shape, the foot of which is 11m long and 2.6m wide. The wreck appears to made from heavy iron or steel construction with round-top rivets approx 3 & 1/2mm in diameter. There was some wood, possible rib, sticking out of sand about 3/4 of the way along left hand side.

Mystery ship of Moreton Bay.
Was she the MV Davara?

On our Queensland Maritime Museum`s facebook page there has been some dicussion about this vessel I am sending you..Am also sending some replies which may help. Apparently she was believed to have worked around Moreton Bay. Am hoping you may be able to help me out with this one.

Owen Grimes I googled MV Davara, and all I could find was a fire aboard it 1959/60 in Tasmania.

Neil Todkill Approx 1958 I went with my father on a vessel similar to photo to Bribie Island with drums of Bitumen for the first sealed road on Bribie Is. The 3 miles from the surf beach to the Bribie Island jetty.

Warwick Lynch Maybe if someone is familiar with the”K” on the funnel?

Peter Conlon Hi Warwick Lynch, just digging around on the net and come up with the following records, it explains the “K”: 22/10/1959 DAVARA, 145/47-m.v., owned by the Kimberley King Island Trading Pty Ltd, has been abandoned by her owners as a total loss as a result of damage sustained when fire broke out on board while she was lying at Stanley, Tasmania.

Peter Conlon Davara. Motor vessel. Replaced the auxiliary ketch Will Watch, lost near King Island, 1958.
On 22 October (year?), a fire at Stanley caused by a faulty stove killed the engineer.

I am seeking the muster roles of the US Navy ships that were in port in Brisbane in June/July 1941. Can anyone help? 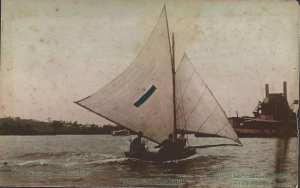 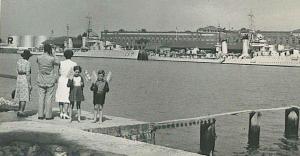 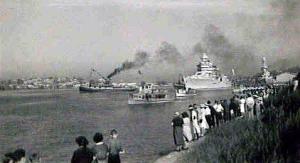 The following parapraph in Moreton bay People (page 13, Adrian Dalgarno) mentions a fish market and memorial: “With so many personnel involved there were always incidents occurring. Once, an American barge took an Australian tank and crew of five across from Toorbul to Bribie. Unfortunately the tank was let off too early, and sank in thirty feet of water. Tragically, the five crew members drowned. Only the tank’s pennant could be seen above the water. A plaque was erected to commemorate the loss, just where the fish market is now located.”

Do you have any information on where the memorial and fish markets were? I’ve had a bit of a look and a talk to the museaum up there but no luck so far. I’m taking the kids up on Sunday with our bikes to have a better look.

Does anyone recognise this shipwreck, supposedly photographed on Bribie Island in 1990??

Jim Lergessner of Woorim on Bribie Island has provided an answer to the question of the identity of the hulk on the beach at Bongaree.

It was the “Cormorant”, a former pilot and survey vessel, and later used as coal barge. In the late 1950s it was towed to the beach to be positioned as a groyne to stop sand erosion.  Jim tells the story that the men who towed the vessel to Bribie got on the grog and the tide went out before she could be properly positioned. So the hulk stayed where it was!

It continued to be a popular attraction to visitors and local kids alike until the Council deemed it unsafe and demolished the remains in 1991.

Does anyone know which vessels these old anchors came from? They are on the remains of wharves below the cliffs at Kangaroo Point, Brisbane. Do you think just maybe they could have come off the Bucket Dredger S.D Platypus  ??? as she worked up that top end of Brisbane River for many years in the 50s.

Do you have any information about early settlers seeing the wreck of a ship south of Jumpinpin (Not the Cambus Wallace, I mean an earlier wreck)? John  W S Willes had also seen this. There was a reference to the wreck in Mr Wille’s personal papers, another one in a lecture held by marine archaeologist A J Pixley in 1970. The wreck was there until 1872, the date it appeared there however is uncertain. The Russell Island Museum there are a some exhibits of interest. Do you know if any of them had possibly been taken from the wreck at Jumpinpin by early settlers?

I don’t have any information about the vessel in my books but Lance Paterson in his two volumes “Wreck-ollections” mentions three possibilities for that time period: The “Jane” a Brigantine, 180 tons.  Captain Gould. Lost on Stradbroke Island, 17 February 1857; the “Triumph” Schooner, 130 tons. Struck a reef off Stradbroke Island, 9 August 1866; and the “Salamander” a schooner of 87 tons, beached 21 January 1868, Stradbroke Island.

Just wondering, if you know anything of the ship POLMAISE, arrived Wide Bay 1872, I am helping a friend with a family tree, and it appears that the TREVITHICK family that she is researching may have come out on the POLMAISE. Any help or suggestions as to how I might find a passenger list would be very much appreciated.

Here is a picture of the ship my father was on board, MV Havfru (“Havfru” is the Norwegian word for “Mermaid”), taken in 1941, just after the accident. The picture is a 1941 view of the Norwegian tanker MV Havfru (Norwegian word for mermaid). Taken in Moreton Bay as she underwent inspections and temporary repairs after running aground near the Cape Moreton lighthouse on July 14, 1941. (Note the 6 inch gun aft).