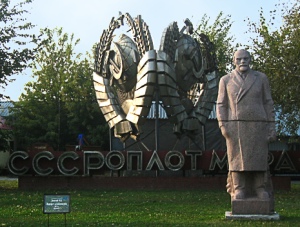 With the fall of the USSR, thousands of Soviet statues were destroyed or dispersed. Some ended up in Moscow’s Fallen Heroes Park. It displays more than 700 sculptures saved and preserved from the Soviet era. Walking through the park is like visiting a cemetery, bronze and stone sculptures loom from every corner. The park has mutilated busts of Stalin, as well as those of Lenin and a statue of Dzerzhinsky, the founder of what became the KGB. There’s a massive Soviet emblem, and clusters of modern art contrasting with the very non-conceptual Communist monuments.

Further to my blog of 09.09.2017 – Centenary of a Revolution, my son Trevor informs me that Melbourne’s Heidelberg Gallery (The Heidi) has a Constructivist Display of artworks mainly from the Russian Revolution. No doubt many of the items on display would have come from Moscow’s Fallen Heroes Park.

I have never felt a great emotional attachment to statues. My first was probably the dog sitting on the tucker box five miles from Gundagai. 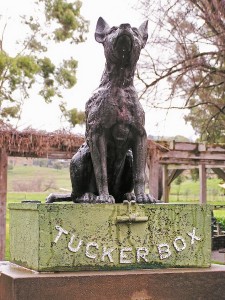 The Dog on the Tucker box (photo courtesy AYArktos)

For me, it always the highlight of our road trips to Melbourne.

The other  statue that has triggered my emotion was seeing Winston Churchill’s statue on a Paris footpath as our tour bus flashed past. It was so unexpected, considering the historic rivalry between the English and the French, but a touching acknowledgement of France’s gratitude for Churchill’s help during WWII.