Recently our cousin, Chris, in New York, kindly sent me a copy of the December 1916 edition of the National Geographic magazine. It is devoted entirely to Australia and provides a unique view of us from the perspective an American writing from a century ago.

If you have wondered what 200,000 bags of wheat look like, then here you are!

Here are just a few of his observations:

Australia is the most isolated of all inhabited continents and is remote from the centre of all the world’s activities.

(1916 was well before aircraft compressed the long journey time from America and Europe.)

The aboriginal population is the lowest in the scale of beings having human form.

(He would never have described them thus today.)

Australia is roughly the same size and shape as the US…Its surface lacks variety…The people live in the vegetation areas around the coast…With the exception of the Murray-Darling system, there is a lack of large rivers compared to the US

THE SETTLEMENT OF AUSTRALIA RESULTED FROM THE AMERICAN REVOLUTION

Curiously enough, the establishment of the first colony on the new-found continent is an episode in the history of the US. It was proposed by the British Government to utilize the land as a home for the “Loyalists” (Tories) who found life in the American Colonies uncomfortable at the close of the Revolutionary War. They were to be supplied with land and money, Malay slaves or English convicts were to be provided as laborers.

Fear of the French fleet and the removal of many Tories to Canada led to the abandonment of this scheme. ..Place must be found for undesirable citizens, who, before the Revolution, had been sent to America ….

(Then typically, the author describes our explorers, our trees especially the Eucalypts, and our unique animals.)

(Today we welcome them as house owners and footballers.)

On the basis of doing a moderate amount of work amidst agreeable surroundings, most Australians are workers. Short hours are the rule, and there is a tendency to ward off competition by legislative enactments rather than to meet and overcome it. The desire for money is in most cases a desire to secure a competence, not to secure power and prestige by amassing a huge bank account.

(Then he describes our Primary producers of sheep, cattle, and cotton. Our rabbit proof fences are also highlighted.

In 1916, World War I was in full swing and there are many photos of our servicemen and women setting sail for the battlefields of Europe and the Middle East. Anticipating possible changes in national boundaries occasioned by the war, there is an interesting advertisement for a War Defying Atlas entitled Hammond’s 1917 Self-Revising Comprehensive Atlas of the World.) 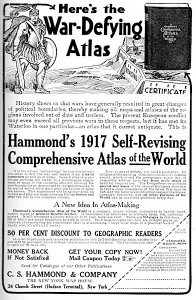 Even in 1916 a US Company was quick to recognise a marketing opportunity!