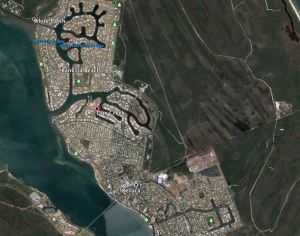 Dux Creek is part of a canal development on Bribie Island

Johann Carl Gustav Dux, known as “Gus”, was born in West Prussia, on 1st June 1852.  Johann worked as a seaman, jumped ship in Cooktown, N.Q., and then worked his way down the coast until he arrived at German Station, now known as Nundah (a suburb of Brisbane).

William, another of Gus’s sons, carried on his father’s business, and was known locally as Billy, the crabman. 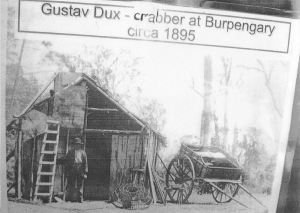 Gustav Dux outside his shack at Burpengary (Caboolture) around 1895