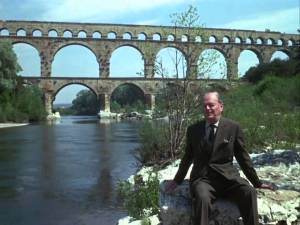 One of the benefits of ageing is that one has all that extra time available during a sleepless night. For me, YouTube has recently occupied much of my ‘bonus’ hours. In particular, I have enjoyed revisiting many of the films, documentaries and TV series that influenced me in my twenties. Most recently, I have watched ‘Civilisation – A Personal View’ by Kenneth Clark. It was made in 1969, and much has happened to our civilisation since that time. Here are some of Kenneth Clark’s closing remarks to the series:

‘The future of civilisation doesn’t look very bright, and yet I don’t feel at all that we are entering a period of barbarism. The things that made the dark ages so dark – the isolation, the lack of mobility, the lack of curiosity, the hopelessness –

don’t obtain at all. I’m at one of our new universities – the University of East Anglia – where these inheritors of our catastrophes look cheerful enough.

Naturally, these bright minded young people think poorly of institutions and want to abolish them. One doesn’t need to be young to dislike institutions, but the dreary fact remains – even in the darkest ages, it was institutions that made society work. And if civilisation is to survive, society must somehow be made to work.

“In spite of recent triumphs of science, man hasn’t changed much in the last 2,000 years and in consequence, we must still try to learn from history. History is ourselves…

“We should also remember that we are part of a great whole, which for convenience we call Nature. All living things are our brothers and sisters…”

I wonder what Kenneth Clark would add to these thoughts now? 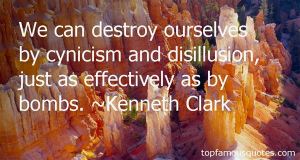 A quote from Kenneth Clark’s ‘Civilisation’. 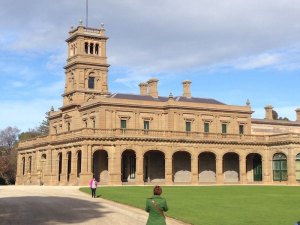 My recent visit to Melbourne’s Werribee Mansions was enhanced by a calm, sunny day: just perfect for exploring its beautiful gardens and interesting sculptures scattered throughout them. The mansions’ neighbours are an open range zoo and an air-training field. (Not a good situation if one is forced to bail out into a tiger enclosure).

Werribee Park Mansion was built by Scottish pastoralists Thomas and Andrew Chirnside between 1874 and 1877 in the Italianate style. Its residential and working buildings supported a large farm workforce. The rooms open to the public include the billiard room, the main bedrooms, the reception rooms and part of the kitchen. The Mansions have been used as film sets on several occasions, perhaps most notably for all the interiors used in “The Pirate Movie”. I remember this movie well because my then teenage daughter, Karen, had an obsession with it (or perhaps if was with its star, Christopher Atkins). 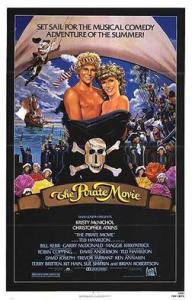 The sheer size and scope of Werribee Mansions serves as a reminder of the immense influence and wealth the pioneer pastoralists had in the early days of European settlement and expansion in Australia. In viewing Werribee Mansions, I was struck by the similarity it shares with another relic of Australia’s pioneering days – Glengallan Homestead, just outside Warwick near Brisbane. 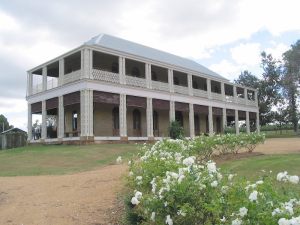 When Alan Cunningham discovered the Darling Downs and the way to the Moreton Bay settlement through what is now known as Cunningham’s Gap in 1827, he opened the way for pastoralists to squat west of the Divide. The first of these were the Leslie Brothers with their 8,000 sheep in 1840. With them was a young stockman, Scots born John Deuchar. Over the next twenty years, Deuchar rose to prominence as manager of a number of sheep stations in the Warwick area. In 1857 he married the 16 year old Eliza Lee and they enjoyed an extended honeymoon in Europe. Deuchar had entered into a partnership with Henry Marshall at Glengallan, a property just outside Warwick, and on his return he set about improving the wooden houses that made up the Glengallan homestead. In 1867 he commenced his stone house to grand designs, but failed to understand the fickle nature of the Australian climate. After several bad seasons, he was broke and died insolvent in 1870.

Perhaps, if Nature had been more kind to John Deuchar, Glengallan Hmestead would have been as grand as Werribee Mansions, but sadly his dreams were cut short, as can be evidenced by the unfinished crenulated walls of Glengallan today. 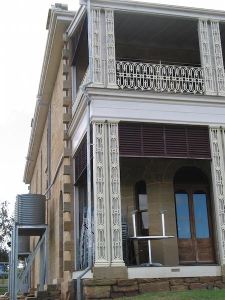 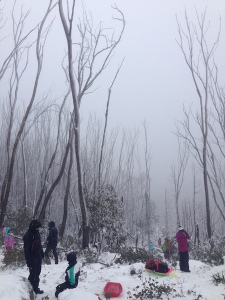 When travelling, the weather plays a large part in forming a first impression of a place. Usually, when it is cold and rainy, this is unfavourable. However on our recent day trip to Lake Mountain in Victoria, such conditions served to enhance our experience!

Lake Mountain is situated in the Victorian mountains just some 118 kilometers from Melbourne, so it is easily reached for a day-out from the city. Incidentally, there is no lake at Lake Mountain, the area was named after George Lake, who was the Surveyor-General of the area including the mountain.

But it is not just Lake Mountain that is of interest, I felt I was entering a different world at the historic town of Healesville , which was surveyed as a town in 1864. It was named after Richard Heales, the Premier of Victoria from 1860–1861. The town became a setting off point for the Woods Point Goldfield with the construction of the Yarra Track in the 1870s.

Today, Healesville has a very arty feel about it, which is demonstrated by the quaint shops on the main street. Healesville Hotel is a true country pub and had three open fires roaring in retaliation against the cold and wet conditions outside. It was like stepping back in time.

In contrast, the next town of Marysville was completely new. Like Healesville, it was also established as a stopping point on the Yarra Track, the route to the Woods Point and Upper Goulburn goldfields, with a butcher’s shop and store in existence by the time the town was surveyed in 1864.

However, on 7 February 2009, a bushfire destroyed most of the town, including the primary school, police station, The Cumberland Hotel, and almost all of its houses. The entire town was declared a crime scene and was effectively closed off while Victorian and Federal police recovered bodies and conducted investigations. It was reopened to the public on 23 March. Reconstructing the town began immediately, and today it is thriving again as a dormitory for visitors to Lake Mountain. 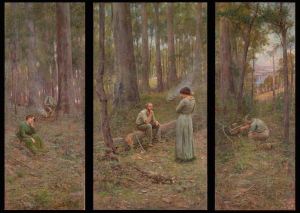 It’s a steep drive up the mountains from Marysville to Lake Mountain, but in the muted light of the rainy and overcast weather, the drive through the thickly wooded forests invoked exactly the atmosphere of that Frederick McCubbin masterpiece ‘The Pioneer’, which he painted in the nearby Mount Macedon area.

It was snowing when we reached Lake Mountain Alpine Resort, and we were surprised at the large number of cars crowding the car parks. There must be a lot of people watching the weather reports in Victoria. Being from Queensland, it was a novel experience seeing the Australian bush covered with a mantle of snow, and even more eerie were the skeletal trees – the remains of the 2009 bushfires – still prodding at the heavy fog engulfing the area.

‘Do you have a guilt free bum?’

Well that’s getting a bit personal, I thought, until I read further: ‘You can help protect local wildlife. Make the switch to toilet paper made from recycled paper today!’

I’m at Melbourne Zoo, and I must say that zoos have really changed since my first zoo experience in the 1950s, when I used to visit the private zoo in the garden of the old Surfers Paradise Hotel. Highlights then were to visit the monkey cage and make them pull threatening faces (they also had a propensity to snatch glasses from unwitting viewers). Then there was a huge crocodile that I never saw move in any of my visits (there was not much room to move anyway). My other memory was the butterfly house that contained a beautiful display of hundreds of carefully catalogued butterflies. Unfortunately they were all dead.

Melbourne Zoo is something completely different. It’s more like a botanical garden with the animals situated discretely in themed enclosures. 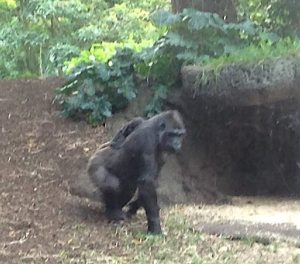 Gorilla carrying baby on her back 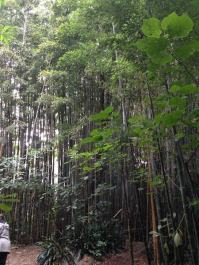 Most popular are the gorillas with spectators eager to catch a glimpse of the baby gorilla, born in March this year. However, I found it hard to forget that the silverback, Otana, had more recently bashed another female gorilla to death in this same enclosure. Nature gives and takes away even in the ‘controlled’ zoo environment.

The lemurs are a more unusual exhibit and their enclosure reminded me of something from the computer game, Riven (Myst 2). 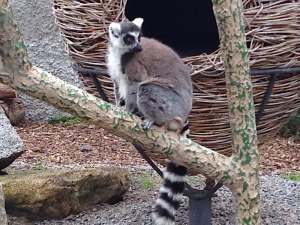 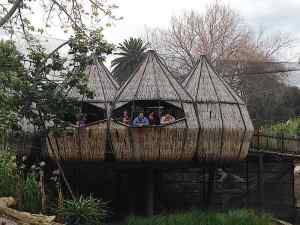 In the lion enclosure, three males were relaxing in the afternoon warmth on top of their hill, when a passenger jet flew low over their enclosure. Instantly they were roused and began to answer the roar of its jet engines with their own roars until the plane had passed into the distance, and they resumed their slumbers. Maybe they thought they’d found a soul mate! 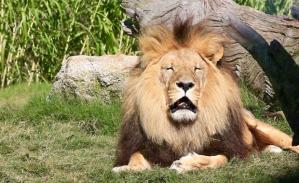 Then came the butterfly house, but this time, I entered a huge cage with the butterflies flitting from tree to tree in all their living glory! However, for me, probably the most memorable exhibits were the toilet bowls placed not so discreetly around the zoo to remind me of my guilty bum. I slunk home, resolving to buy a roll of recycled toilet paper next time. 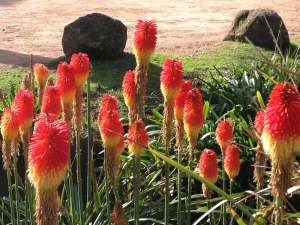